There is a wealth of information that can be found here but if you still have any questions, please contact us here.

We provide orientation programs to help students become a part of the campus community. Click here for more orientation details.

Financial Aid is available for all students enrolled in classes. Click here for financial aid information.

Our goal is to ensure that every faculty member is has the tools available to them to help their student succeed. Click here for more faculty tools and log into your personalized Polytechnic account.
Click here to login as Faculty 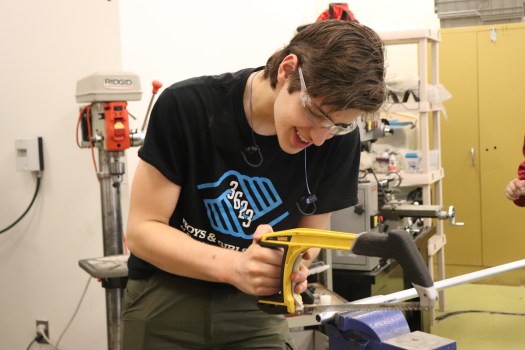 Boys & Girls Club of Fitchburg and Leominster’s robotics club member and a junior at Leominster High School Vincent Soubbotin works on cutting material in the club’s shop room as the team gears up for the First Robotics Competition this month.

LEOMINSTER — The clock is ticking for Team Terrorbots 3623, a group of local students and members of the Boys & Girls Club of Fitchburg and Leominster who are gearing up to take part in the FIRST Robotics Competition on Feb. 28.

On Monday, the team was in the midst of its six-week build period, and members were working hard to ensure their robot was prepared for competition.

“The frame of our robot is done and now we’re just working on the final mechanisms,” said program coordinator Jacob Janssens, who has been taking part in the robotics competition for 12 years.

“This particular competition is a capstone for what the club does with its S.T.E.A.M. programs,” Janssens said. “It brings all of the science education, the technology, engineering, math, and art all together. They get real experience with the machines, the safety that comes with that, high-level programming, engineering, and design.”

The team of 10 students will be competing against other New England teams in two separate competitions in Woodstock, Conn., and next month in Worcester.

If successful, they will move on to the District Championship in West Springfield, and then the World Championship in Detroit, where they would compete against about 400 teams from across the globe.

“This year, the robot has a ball shooting mechanism, which is very impressive,” said Janssens. “These kids have been working hard, and I know they’ll be ready in two weeks.”

Team member Jancarlos Oquendo, a junior at Fitchburg High School, said the robot this year will need to accurately shoot a ball at a target and climb obstacles during the competition.

“This is probably the most powerful machine we’ve made since I’ve been here,” said Oquendo, who joined the team about five years ago.

Jalen Leider, a junior at Montachusett Regional Vocational Technical School, is tasked with driving the robot during competitions.

“It can get pretty tense while you’re driving with the other two teams,” said Leider. “It’s pretty stressful, but it’s also pretty fun.”

Oquendo said getting involved in the robotics team has allowed him to learn new skills while also gaining a hobby and several friends in the process.

“I came into this with zero knowledge of how to do anything, but I ended up falling in love with it,” Oquendo said. “We just work well together. During the regular season, everybody feels like a family away from home.”

Leominster High School junior Vincent Soubbotin, who designed this year’s robot, said he enjoyed the engineering challenges and design process of putting together a robot.

“The challenge of making this and then actually building it is very intriguing to me,” said Soubbotin. “I’ve always been interested in technology and then I came here a few years ago … and I’ve been in it ever since.”

The rules of the competition require that teams spend no more than $5,500 on their robots, with no single piece of equipment costing more than $500.

To inspire and enable all young people, especially those who need us most, to realize their full potential as productive, responsible, and caring citizens.